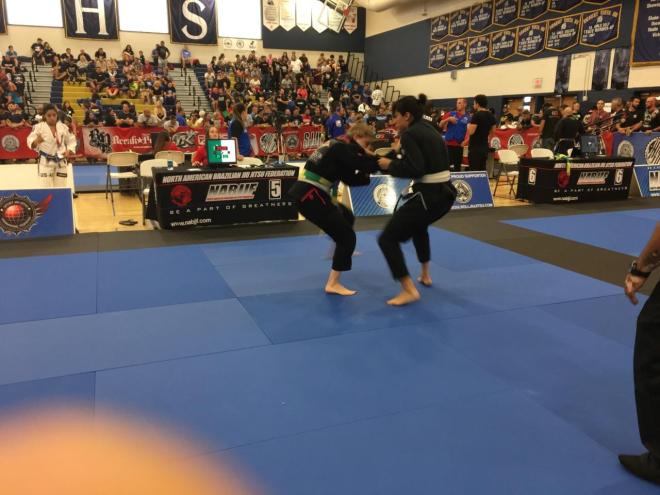 Well it happened and it’s over. I have so many mixed feelings about how it all turned. Going into it I didn’t have the same frame of mind that I had with the previous tournaments.  A lot of my personal relationships have shifted and I think my feelings about that definitely came into play and distracted me but it wasn’t all bad. My dad was able to watch me compete and that was a delightful surprise. The morning of the tournament he called and told me to cancel my plans with my friends for the ride to Phoenix because he would be taking me. My sister also joined us!

We got to the tournament early and ended up with a lot of free time. My family got to eat and I just got to deal with more anxiety about my match. I just felt so much more nervous this time. As I’ve had time to think about it, I think that nervousness may have come from pressure I had put on myself to do well based of off how the last two tournaments had gone. They went well and honestly, those successes felt like flukes since I’m so used to not doing well athletically. I played basketball and softball as a kid and was never that good but that may be because those weren’t the sports for me. Anyhow, back to the tournament! So all the time I had before the match evaporated once it was time for weigh ins and everything was a whirl wind.

I was where I needed to be with my weight but my gi was too short! Luckily, thanks to the advice of my coach, I packed an extra. As soon as I passed my check, I was up. I hated running late and was still readjusting my belt. Then it was time to get on the mats. The match started off alright. I pulled guard and tried to arm bar my opponent from there. Details are hazy but the first half of the match went well. I wasn’t able to get the arm bar but was in control and managed to take her back. I couldn’t get my grips right to complete the choke we had been working on in class.  I lost my position and may have moved into side control and then mount. I need to watch the video again but at some point I decided to move from being on top to bottom and everything went south after that. I was pinned in side control and mentally a switch went off. I just didn’t want to be there. I started to feel like I was going to throw up and cry. I think all the stress and anxiety I had going into the match got the best of me. From what I heard after, it looked like I totally forgot the basics, like how to shrimp! My opponent then got an Ezekiel choke on me. I was able to sweep her and get on top but she still had the choke and  I was beginning to cough and gurgle. I tapped and placed second in our division. We were the only competitors.

I still feel weird about the whole thing. I hated disappointing my coach and not having a decent answer for when he asked me, “What were you thinking when you went on bottom?” One of teammates volunteered answer for me and suggested I probably felt more comfortable on bottom. This is true. I still don’t feel very confident in my top game even though that teammate has been helping me with my arm bar from mount. Besides all of that, I think the loss was a necessary experience. I’m still figuring what I’ve learned from it besides confirming my suspicions that I don’t love competing. Even though it’s not my favorite thing, I still plan on competing in the future because I think it’s really important for me to push myself out of my comfort zone and take risks. I hate when I feel like my life has become stagnant and competing helps keep those feelings at bay and gives me a chance to test what I’ve been working in class. At the end of day, I feel so lucky to have found something that I’m passionate. I love how deeply humbling jiu jitsu can be and how that humility feeds my drive to learn more and continue to improve.

One thought on “NABJJ Nationals”